I know it’s practically heretical, but I’ve talked here before about my love affair with RHSS (that would be Red Heart Super Saver, for any of you who have never had the pleasure of encountering an OMG-teh-ebil-squeaky-babby-melting-acrylic thread). There are…new colors. New colors that I must have. New colors that need to find their way into the giant-granny-square-blanket-that-may-never-be-finished. And scarves that won’t get ruined when thrown into the wash. And the sweaters I really want to make for the kids. And that big-ass blanket I cut up. 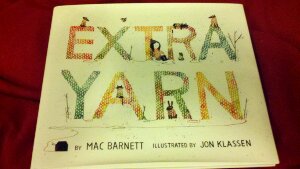 I found this at a little bookshop in Maine this week and had to have it. It’s s story about a little girl who finds a magic box of yarn. The kids love it, but I got it for me because I was tickled by the concept and crazy about the illustrations. 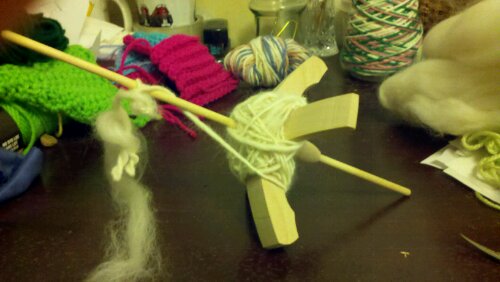 , along with a copy of Respect the Spindle. After an hour or so playing around with it

So a while ago the internets told me that you can dye wool with Kool-Aid and my reactions were:

So then a couple of years went by, lol. But this last week I got the Kool-Aid and a skein of KnitPicks bare bulky weight and three eager children all together at once, and this is what happened: 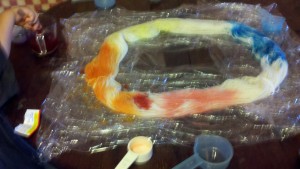 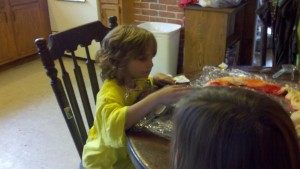 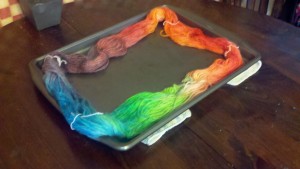 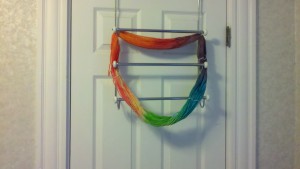 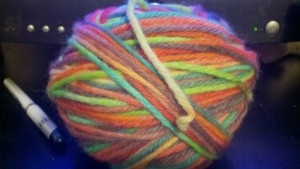 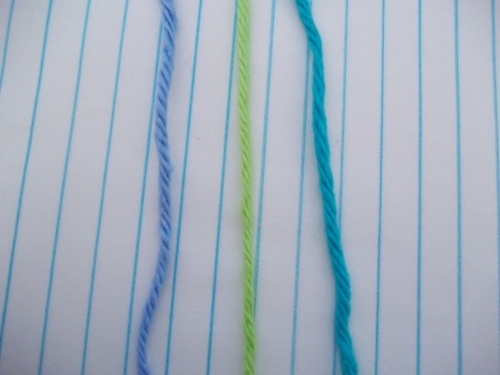 Which one is which? 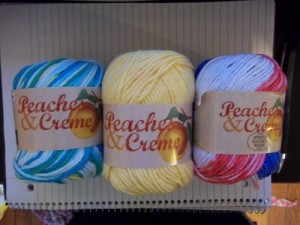 Totally new yarn that has been released under the Peaches & Creme name. The mill was closed and the name was bought and now I’m seeing the new version at my local Walmart and decided to give it a try. Any excuse for more dishcloths!

It’s been a very, very long time since I had a wander around Boston. IIRC, the last one was in 1994, when I spent a solid week roaming freely. I was visiting a friend, and he was working during the day, which left me free to discover the city.

I moved out to this area almost 7 years ago and I can count the number of times I’ve been properly in the city on one hand. Sad, but I’m old and settled now. 🙂 I’m lacking the time to just take off for a day and play.

Yesterday I had to go there for a medical appointment, so I brought Michael along with me for moral support, and we made it a day in the city that happened to include an appointment, instead of just popping in and out for the thing. And it turned out to be an incredible day, instead of one that could easily have been difficult and depressing.

I don’t have the pictures; he was the expedition photographer, lol. We got there just as the sun was coming out for the afternoon, between rain showers, and just walked around semi-aimlessly, doing the tourist thing. We wandered through the Common and the Public Gardens and generally just hung around until it was time for the appointment. Once we were done with the medical thing, it was lunch and a trip to Windsor Button. That was my birthday present, lol…I told him he didn’t have to buy me anything, just endure the stop with me. 🙂 I wound up buying this, which I’ve wanted for a while, because I couldn’t decide on yarn. I was really impressed with the wide range of yarns they carry…there were acrylics and blends all snuggled up with alpaca and wool and silk. There’s something about that that makes me unreasoningly happy.

Anyway, the appointment was inconclusive. They had trouble finding the records that my doctor’s office sent, so he wanted to look over them before giving me a conclusion. His impression, however, was definitely not MS, which leaves us with, “I don’t know.” So probably back to waiting to see what happens next. Which is ok. These things sometimes stay mysterious. What can you do?

Also, this is the first time I’ve taken the commuter rail into the city and it was awesome. It was amazingly stress free and worth every penny. And it’s funny to realize how close together everything here really is…if you’re a train. 🙂 Not to mention how compact the city is.

, it was a thoroughly awesome day. I really ought to go wander around Boston more than once a decade.

Or at least this segment of it, anyway… 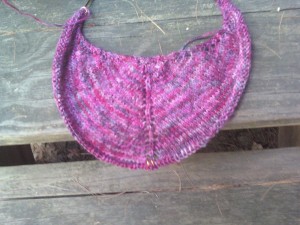 Took pictures of yarn (this is a BRS from Knitivity): 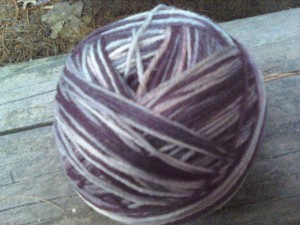 Wandered through a Walmart that just *expanded* their yarn selection. As far as I can tell, this has to do with the switch from Peaches and Cream to Sugar ‘n’ Creme, since the expansion was entirely Bernat yarns. But still…*more* yarn. In a Walmart. Amazing.

Watched as my partner hunted squirrels *inside* the cabin. Destructive little beasts. Hopefully I’m done having to clean up after them…for now…

Ate more of the best Southern food I’ve had outside the South…who would have guessed that I’d be going to Maine for the perfect pulled pork sandwich?

Took a walk in the woods.

His yarn? Pretty much where my whole budget-for-such-things goes.

The colors are amazing and even prettier in person, he has lace yarn with nylon in it (!), which saves me the fear of destroying it, he runs awesome specials on his blog, and he’s a damned nice guy on top of all that.

And have I mentioned that his yarn is gorgeous?

He’s doing two custom dyes for me soon and I can’t tell you how excited I am to see them, given how much I like his *accidental* combinations. And his regular colorways. And…well, go see. 🙂

Have I told you lately how much I love you?

You survive the rigors of being loved by a child. You come in many

, many colors, both sane and insane. You are the perfect medium for granny squares, traditional and not, and the afghans they become. You make it possible to do work that I adore beyond measure, even in the months when the car needs fixed.

I may hang around with those fancy wools from time to time, but you’ll always be my best friend, the one whose known me since childhood, the one who is there even if we don’t talk for a while, the one thing in my crafting life that is irreplaceable. And I love you.