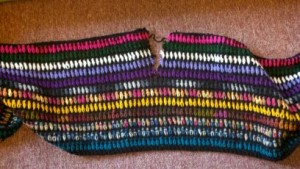 I’ve been slowly working on a Vintage Vertical Stripe afghan for the last year or two, and I’ve been rather severely hampered by the fact that I made it way, way too long to start with. I was planning to have the stripes run vertically on a bed, and I totally overestimated how long it would need to be, which I suppose was my penalty for starting it while I was in the middle of the woods. 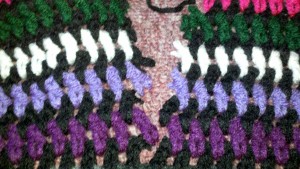 After carefully cutting a couple of feet off of it, I started unraveling the cut edge and reworking the last stitch or three. I did one row at a time and worked up: 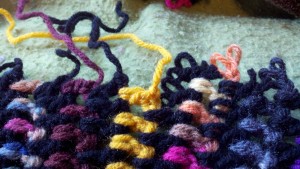 On the “wrong side” rows, it took a little more finagling and working some twisted stitches, but it came out looking fine. The right side was dead simple. By about halfway through I was fairly certain that what I was doing would actually work.

And with another half-hour of work, I discovered it had. 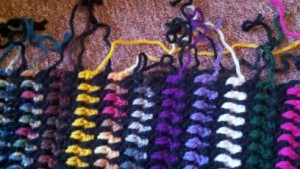 I have some weaving of ends to do, but I needed to do that anyway.

I won’t lie. I feel dreadfully clever. And I’m pretty excited that I’ll most likely finish the thing now. How could I not?

One thought on “This is what I did to my crochet:”